Blog
You are here: Home1 / Blog2 / Uncategorized3 / 5 Tips for Manufacturers to Network Like a Pro 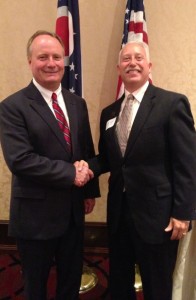 Networking is necessary for growing your personal and professional brand. Networking is a technique and competency that needs to be honed and crafted in order to be effective. Although it seems “easy” to many, the most successful business people have strategy behind their networking process. Recently my boss (Rob Felber) did a presentation on “Networking for Manufacturers”, which provided attendees with helpful tips as well as tools he has developed over more than two decades of networking. Below are 5 key takeaways from the seminar for you to use at your next networking event.

When attending an event, it is best to arrive early and get to know the speaker before the event and build that relationship. By interacting with the presenter beforehand, you are creating a dynamic where you could be highlighted during the presentation. Also, talking with the speaker prior to the presentation gives you an advantage when it comes time for the Q&A portion of the talk. Being the first person to ask a question puts you and your company in the spotlight with your peers and colleagues.

Crafting your 10-to-30 second commercial for networking events is essential in creating great first impressions. Practice it so that it becomes second nature.. Don’t bombard people with information. Keep it simple and to-the-point.  Start it off with a pain statement and leave it open-ended so that your prospect will be intrigued and want to know more.

When joining a networking group, it is important to get involved early. Volunteer on committees, or get in front of the board of the group. Getting to know key influencers in the group brings a level of ease to networking. Also, the more individuals you become close with, the more opportunities you will have for members to introduce you to prospects.

When attending a networking event with colleagues or peers, it is important to ‘divide and conquer’. Sitting with colleagues or friends is limiting and closes you off from making new connections. Unless you surround yourself with new people, you are not going to build relationships. Also, make sure and review the attending list prior to the event, looking up prospects on LinkedIn and trying to target and sit next to those individuals at the event. When researching your prospects prior to an event, see if any of your connects are able to make a personal introduction.

Social media is a great tool to enhance your personal and professional brand. When you’re at seminars and events, tweeting or posting about it on your other social media platforms gives you the opportunity to grow your social media presence and following. Using social media to talk about what you’ve learned also opens the door for further conversations with speakers and attendees.