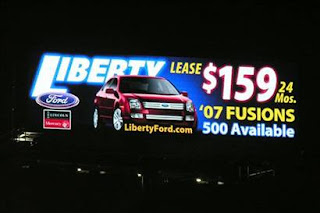 Ah, the old argument of too many billboards around the city is back in the news again but this time with a new digital twist. Since Clear Channel debuted its digital boards in Cleveland (little known fact… Ohio is often seen as consumer test market) in 2005, the anti-billboard people went nuts.

Did you know for every new digital billboard that pops up, Clear Channel must remove traditional billboards that equal two or more times the space of a digital billboard? Read the latest argument happening in the City of Cleveland in this article. City Council’s President is getting an earful from everyone on this billboard issue. Hey, these billboards still fit within the Highway Beautification Act, right?!?

Lots of controversy this week in our city! Not to mention this is just a few days after the FBI raided the county offices, brush up on those details here.

So would you like to see those billboards gone? Leave your comments here.

>Word of the Day>Twins invading Twinsburg, Ohio!
Scroll to top