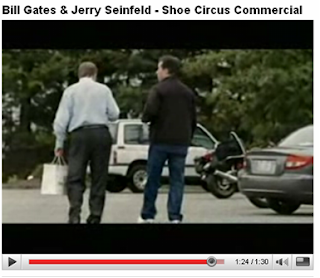 We are all fans of Jerry Seinfeld, especially Bruce and Rob Felber! So what are your thoughts on his new ad with Bill Gates? If you haven’t seen it, you can watch the commercial here including the little shimmy Bill Gates does at the end!

So what does this ad mean? Well for one it’s creating buzz but will the buzz lead to a bigger goal of… more sales, launch a new product, or lead to nothing? Read about what others are saying about this commercial.

The first time I saw this commercial I thought, well that’s strange. Then after watching it a few more times I actual chuckled. The second ad released within this new campaign can be found on YouTube. The message is all about Bill Gates (and Jerry) learning what Microsoft customers want – but isn’t that a little too late? If I was Apple, I’d be not only laughing but also giving my research department a bonus for doing their homework years ago.

Tell us what you think by leaving your comments. And yes, you can leave your favorite Seinfeld quotes here too!

>CMO from The Plain Dealer Speaking on Wedneday>Word of Day: Share of Voice
Scroll to top