It is what it is. A phrase that just makes sense. Recently, I saw it used in a static billboard (non-digital/vinyl/paper). I usually don’t like to point out faults of other campaigns or least not publicly. Everyone has to be a critic, right?

Well, I was driving on 480-east and saw this billboard with large words: “Certified Pre-Owned.” The words were crossed out with “Used” written below. So I’m thinking another car dealership billboard. No big deal. But what struck me was the difficulty in reading the corner graphics. I failed to make out the words. And no, I wasn’t driving too fast as it was morning rush hour (meaning 45 mph if I’m lucky).

I forgot about the car dealership ad until the next day when I was driving on E. 14 about to get on 77 South and there it was again! It was up-close and personal so when I saw in tiny letters, “It is what it is. NoGrapesNoNuts.com” I was shocked!! A GRAPE-NUTS billboard? I understand its a cereal with no grapes, no nuts, it is what it is. But “certified pre-owned/used?” Are they selling used cereal? Huh? 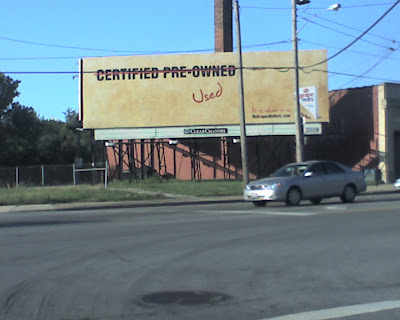 So naturally I jump on the website later that day to find this young actor introducing the history of Grape-Nuts. Its way too long to watch but for the purpose of this entry, I suffered through it. Great, it got me on a website that eventually pointed back to the cereal’s original website. Good job, sort of.

Without pointing out all the wrong and strange elements of this campaign, let’s focus on how you can avoid this train wreck (or is it appropriate to say car wreck? Haha, sorry, that was lame!)…

Let me know your thoughts on NoGrapesNoNuts.com; is it really as bad as I think? Maybe I’m not the demographic, perhaps the younger generations are the target market. Did you see the billboards around town? Send us your comments!

>Keeping track of the hits>Selling yourself
Scroll to top