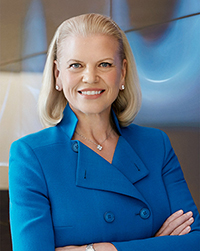 I had the pleasure of hearing Ginni Rometty, current chairman, president and CEO at IBM speak at the Ideas For Tomorrow Series at The Cleveland Clinic yesterday.  Artificial Intelligence (AI) is a hot topic throughout every industry you can imagine. Rometty spoke about the infamous Watson computer, the future of AI, and the need for transparency from companies using AI.  Below are my takeaways from her seminar.

The Current State of AI

When most people hear the term AI, they think that it is some science fiction nightmare but you may be surprised that you are using AI in your daily life. Fraud detection service from your bank, online customer support, news generation (the Associated Press, Yahoo! and Fox all use it for simple story writing), music and movie recommendations from services like Spotify and Netflix and the list goes on and on.

The current AI systems most companies and individuals utilize are “speech to text to search”. The systems are built with some basic Natural Language Processing (NLP) capabilities or the ability to understand language. These systems can answer basic customer service questions or tracking behaviors and find customers suggested products based upon their purchasing patterns. However, these AI systems are not as helpful in highly technical professions or with companies that must mine a significant amount of data.

IBM and the Future of AI

IBM’s AI system is far more advanced and is utilized in technical professions and by large corporations. Rometty made the distinction that IBM refers to the system as “cognitive computing”, instead of AI. IBM’s cognitive computing system was designed to help people make better decisions.  According to Rometty, “A study said on average that a third of your decisions are really great decisions, a third is not optimal, and a third is just wrong. [IBM has] estimated the market is $2 billion for tools to make better decisions.”

Cognitive computing works alongside individuals to help them make informed decisions. Unlike the “speech to text to search” systems to which we are accustomed, cognitive computing systems are designed to solve problems the way that humans do. An example of how AI and cognitive computing differ and be explained when discussing the medical industry.

When asked about skepticism from consumers regarding AI and big data, Rometty stated that AI is powerful and companies need to have ethical standards regarding their use of AI.  “There needs to be transparency from companies utilizing AI.” She stressed that consumers have a right to know, “who trained the computer, who are the experts behind the data, and where the data is coming from.” Rometty also stated that consumers should be told that the company owns their intellectual property and where the data will be utilized.

AI’s Role in the Manufacturing Industry

AI or cognitive computing is a growing and ever-evolving industry. Rometty stated that she believes “100% of future jobs will be changed by AI.” There will be growing pains implementing AI into business, just like there were growing pains in the Industrial Revolution for manufacturers. AI will soon play a great role in the manufacturing sector. HubSpot, the inbound marketing and sales software Felber PR & Marketing utilizes for ourselves and our manufacturing clients, recently acquired Motion AI.

Manufacturers utilizing HubSpot can automate the chat and messaging process and deliver hyper-personalized content to their prospects and customers. AI is the way of the future and will be a resource and a tool for humans to do their jobs more accurately and efficiently. The sooner manufacturers embrace the technology, the more they will succeed in the business world of today and tomorrow.