Blog
You are here: Home1 / Blog2 / Uncategorized3 / The Danger of Hashtag Hijacking and How to Prevent It

If you read our  blog on hashtags, you know that hashtags are essential in social media and provide your brand’s with the ability to find prospects, develop relationships, and make sales. Although implementing hashtags into your social media is important, a good hashtag can be used in a poor way if individuals “hijack” your hashtag.  In this blog, we define hashtag hijacking, discuss the causes of it, and tell you three ways to prevent a major hashtag hijacking scandal that could have a negative impact on your brand.

What is Hashtag Hijacking?

When a hashtag is used for a purpose that was unintended by the creator of the hashtag, negatively impacting your company, event, or brand.

The most common type of hashtag hijacking comes from attention seeking people, commonly referred to as “trolls”. You may have seen this on Twitter. People who take a hashtag and distort its meaning to promote some “junk” offer that is completely unrelated to the hashtag. These trolls like to use multiple popular hashtags in their tweets so that they are more likely to get visibility in Twitter searches. The “hijacking” refers to stealing your well intensioned audience and redirecting their attention to their cause.

Businesses typically run into internet trolls when they’ve set up a hashtag for an event or contest. While this can be an annoyance, trolls who abuse hashtags don’t cause major problems. This is because they tend to move on to another hashtag to gain more exposure after just a short time. If the troll is very persistent and does the same activity over and over again, you can report them as spam to Twitter. Twitter defines activities such as posting links with unrelated tweets and posting repeatedly to trending topics to get attention as spam.

“Haters” of Your Brand

The second kind of hashtag hijacking can have a far more serious impact to a brand’s reputation. This occurs when a hashtag is created by a brand to gain positive PR, but is “hijacked” by “haters” of your brand. These negative individuals use hashtags to to attack the business in a nasty, rude or sarcastic way.

Examples of this include the #ILoveWalgreens campaign and #McDStories. Both are examples where people used the hashtags as a platform to vent about their issues with the companies and share their grievances. 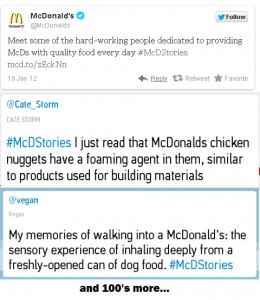 Make Your Hashtag a Statement NOT an Open Ended Questions

For help with social media strategy and implementation, contact us at (330) 963-3664 or RobFelber@felberpr.com